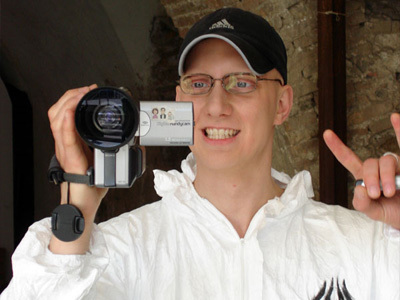 Making of the new video

2007-04-07 | 44 pictures
At 9 o'clock on Saturday morning we gathered at the Ljubljana Castle for the new video shoot. It took the whole day to make, almost up to midnight. Our roles in the video are highly professional; we play these kind experts who ... nah, that's all we're going to say. Once the video has been edited, you'll be able to see it and find an explanation of its story for yourselves.
Dafne Jemeršič was in charge of the direction, Miloš Srdič of the camera and Urška of our costumes. The rest of the technical staff, about 15 people altogether, took care of the lighting, the make-up, technical installations, props and the catering. We had a great time and the feelings about the video are very good, though it was a straining day - it's hardly easy to shoot a whole video in just one day.
Our thanks go to the whole team, who made sure everything ran smoothly. Thanks also to Festival Ljubljana, which kindly allowed us to use their castle premises. Most of the video was shot in a 15th-century room called Kazamate, which was primarily intended to be the castle entrance...