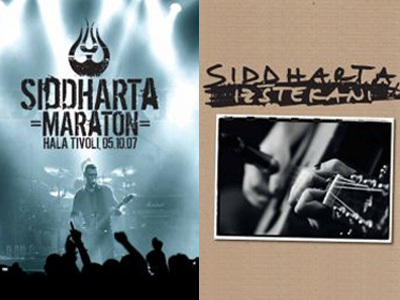 It's going to be a lively December!

It's been a highly successful year for Siddharta, 2007. Armed with a Viktor award, early this year the guys set off on a club tour, played at a few summer festivals, received another MTV Best Adriatic Act nomination and closed the tour with two outstanding live performances: one in the Izštekani show on Radio Val 202 and the other in a concert marathon in Ljubljana's Hala Tivoli. These latter events they found so special that they decided they needed to be re-lived by releasing two live albums.

Thus from Monday, 10 December, 2007, two Siddharta's live albums will become available. The Izštekani album will include a CD with all the music performed during the show, while the DVD will give you the rare opportunity of viewing the radio show. The Marathon album will include as many as four CDs with all the music performed at this musical surplus, which stretched over many hours, and a DVD with a documentary on the happening outside and inside the hall, both before the show and during it.

And to top it all, Siddharta will open an exhibition of concert photos as caught through the lens of photographer Aleksander Remec in the years 2006-2007. The exhibition opening will take place in the Big Bang Giga music store in Ljubljana's BTC at 7 PM . At the opening, the band will be available for signing of the new and the old albums.