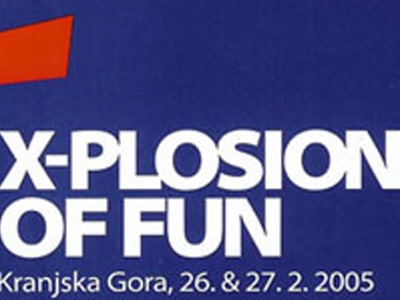 2005-02-26 | 7 pictures
Both for Pokal Vitranc World Cup and us this was the first time music and sports joined hands. At the very beginning of the concert preparations we knew already this one was going to be something special. Special for sports, skiing and Pokal Vitranc, special for music and Siddharta, special for all, fans and non-fans who visited the concert. This is how it was...
We arrived in Kranjska Gora late Friday night, it was freezing outside so we just rushed into our hotel-rooms. The first view through the window got us in a good mood: the ski slope and under in the lit-up stage. We took a short while to check the room where we were to prepare for the concert the next day and to which we brought our equipment before we snuggled in bed.
There was a delay in the morning which allowed us to take time and watch the second run of the giant slalom, unfortunately only on TV. After the race, when we had performed the sound check, we could hardly wait for the clock to show 5:30 when our concert started.
It was 10 degrees below zero and both we on stage as over 7,000 spectators warmed our bodies during the an hour and 15 minutes long concert singing and jumping. After the concert we were awarded with a grand applause. The view from the stage at that point was magnificent.
It is amazing to perform open-air, in the middle of winter at freezing temperature and before that huge a crowd. We could tell that people missed something else beside the ski race and that was the fun, which we helped provide. We hope to do it again.

P.S. We watched the race again the next day and cheered for our skiers. It was exciting, even more so because we were there, under the slopes in the finish arena.