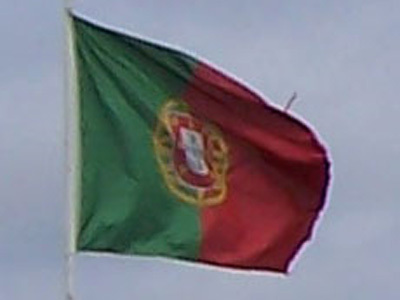 2005-11-07 | 50 pictures
Our trip began at 7 Monday morning from our base camp (rehearsal place). From there we set off for Venice in our cars, from where at 12:30 we flew off to Lisbon. We landed at 2 PM local time (3 PM Slovenia time) and we settled in our hotel right in the centre of Lisbon and a good hour later we were already strolling through the old town. A whole day's stroll ended in a Halloween celebration in Hard Rock Cafe acroos the street from our hotel.

We took the next day as well to see a few of the town's sights and to do some shopping. In the evening hours we went to check out the venue in Pavilhao Atlantico. We took a closer look at the grand hall, the stage, the event preparations, the soundcheck and the backstage area with big names on the doors. We did a few interviews and genuinely enjoyed our every minute spent there.

The last day before the event we met the band Leeloojamais and in a relaxed atmosphere spent with them a pleasant evening exchanging our impressions and feelings about the nomination.

On Thursday at 5 PM the long-awaited evening began. The MTV music awards show. All ran smoothly and very professionally. Each of the nominees had their own five minutes of fame on the red carpet and ours began at 6 PM. We'd never seen that many reporters and flashlights in one place before. Though we walked in there as an unknown band, at that point we felt like big stars. We were photographed every step of our way and... it was amazing! Before the event we had a few interviews and we met big stars such as Madonna, Serj Tankian (System Of A Down), Foo Fighters, and others.

We had no knowledge of the exact schedule, we didn't know when our nomination was on so we just relaxed and enjoyed Borat's hosting and the performances of Green Day, Coldplay, the Black Eyes Peas, the Pussycat Dolls... live. And when time came for the official announcement of the award in our category, we were like in a trance. The feelings were indescribable. Joy. We got our first MTV award!

We would like to take this opportunity to once again thank all who gave us your vote and helped make these unforgettable memories. THANK YOU!!!