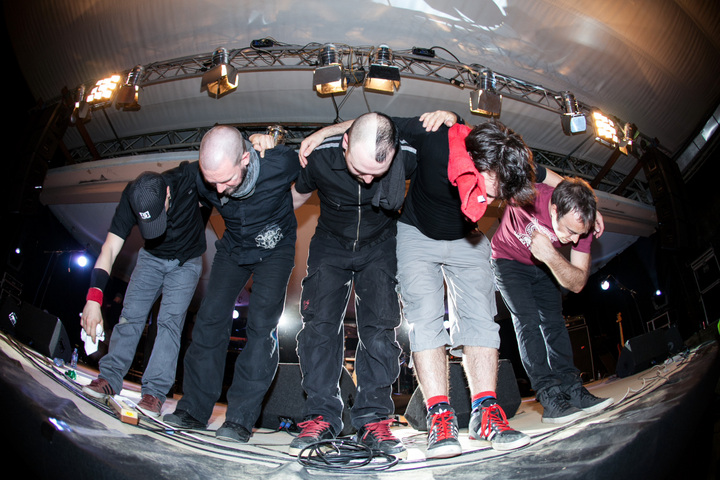 2013-05-08 | 80 pictures
Our Studio 13 welcomed us in an early-afternoon sun and before it knew what hit it we emptied it and loaded our gear onto the bus. The mandatory (almost ritualistic) wait for certain someones to appear, who also again and again serve us with creative choice of apologies why it is totally impossible for them to be on time, resulted in an over-all good spirits as we hit the road and headed towards Zeleni Gaj. Up until this day we were fairly certain that zombies only existed in comic books, novels, movies and TV series, but just before we reached our destination we had to admit how horribly wrong we were. It was a solitary specimen who was lucky that Michonne wasn't around. We unloaded the gear, "refreshed" ourselves and did the sound check. The specifics of the venue caused quite some problems to our Tisa, but she overcame them like a hefe. On our way to dinner our main concern wasn't the food, but football. Do they have a TV set? Will we be able to watch the match? Even if the do have the TV set – do they have the right channels? Will we need to dig them? Well, the TV wasn't there, but the kind hosts at Lisjak went out of their way to indulge us. The whole family stepped up and made sure we were taken care of and in the meanwhile the produced the cables, moved some chairs around and - ta–daaa. They prepared as regular open-air cinema with the match being projected on the wall. The game was more or less in a stop-motion technique (the ads ran a smooth as they come, though). But that wasn't everything; an amazing wine and home cooking quite literally anchored most of us down. And the kindness of hosts was just never ending. While Bayern was literally killing Barcelona (who did some of the same killing themselves) the minutes rushed by and we had to head back to the venue. As soon as we hit the stage we knew we didn't come back for nothing after all this time. The energy of the fans literally electrified the stage and returned it with full force. Working on May 1st turned out to be an immense joy. And the promise stays; we will be back sooner than in 10 years! Thank you!