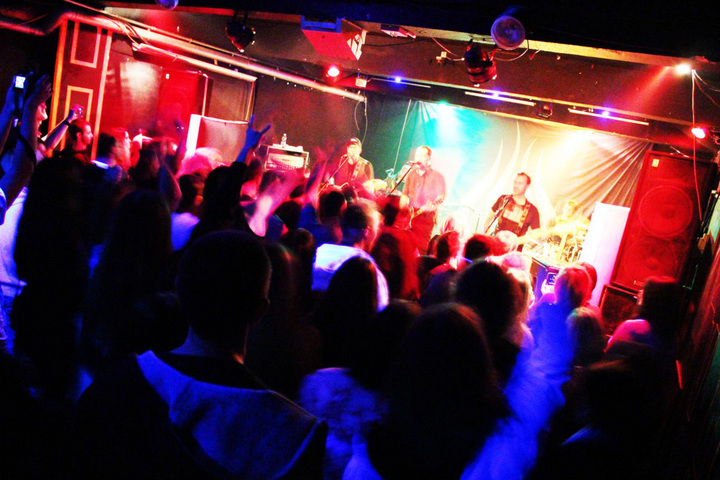 2013-03-28 | 20 pictures
The night trip to Bzayla club was nothing short of a battle that didn't end until 11 AM. The bus was skipping and jumping over the pot holes and our backs desperately tried to stay as close to our beds as possible. At the end we were greeted by Ljubljana-cold and beautiful Poznan sun, which made our tour manager Andraž sing;  “Jst ne morem več na busu živet, jst bi hotu na kavo, jst bi hotu met svoj skret…”

But the battle took its toll; Primož woke up with a broken toe, Tomi's hand was in pain, Tomaž's shoulder is FUBAR as it is and the rest of us would gladly just leave our backs at the massage parlor for the whole day. No, we're not old. We'll just blame it on the roads.

The locals prepared some strong coffee as we plowed through the sound check and the left the stage to an upbeat group Envia. We proceeded towards a steak house to get some vegetables and proteins. Not necessarily in that order. Outside, believe it or not, it was still snowing. Poznan is a very nice town and we wanted to see it such as it was; moon-lit. The moon's effect was, accruing to Jani, extremely positive and despite the obvious tendencies towards disability throughout the group we gave it all our best as we plowed through the setlist for our Polish fans. They surprised us with more gifts after the show; different kinds of beer and special edition t-shirts.

Thank you, Poznan, for beautiful energy and an exquisite evening!