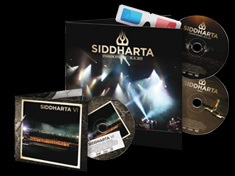 Our new album VI will contain 12 songs and a 24 page booklet with a sea of photographs from the stadium concert (maybe some of you will find yourselves). The record was produced by Ross Robinson.

Double live DVD will contain a three-hour concert on one disc and a 50-minute documentary about the making of the concert and with impression after it and a 3D photo gallery with approximately 70 photos.
The package and its 20-page booklet will also be in 3D. 3D glases will be added for easier viewing of these photographs.

In the first week, between Nov 23 and Nov 30 both products will be available exclusively in Big Bang stores throughout Slovenia, where signing sessions will also be held (dates, places & hours – TBA). From December 1 the new album and the DVD will be available in other stores and via our new on-line store.

On December 1 we are also preparing a concert to honor the release of these two products. The concert will be held in Cvetličarna (Ljubljana) and the set list will also include our older hits. Before the show you will be given the chance to see the pre-premiere of our new video, recorded in 3D, Postavi se na mojo stran! 3D glasses will be available in Big Bang stores from Nov 23. Tickets for the concert available at: http://www.eventim.si/si/vstopnice/siddharta-ljubljana-cvetlicarna-108098/event.html.