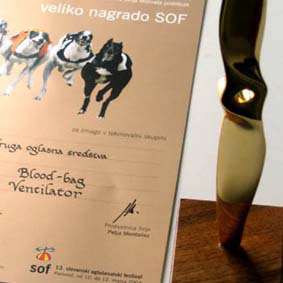 2004-03-10
The Grand award of the 13th Slovene Advertising Festival (SOF) in the category of miscellaneous means of advertising (packaging and sales place decoration) went to Siddharta's special-edition Rh- cover designer Sašo Dornik and the Ventilator group. The cover of the limited-edition album (1,500 copies only) was designed as a transfusion bag; the album was sold from special transfusion hangers. In its rival group the cover was awarded the main award, the Grand SOF award.
Siddharta wish to congratulate Sašo and his team. Way to go!