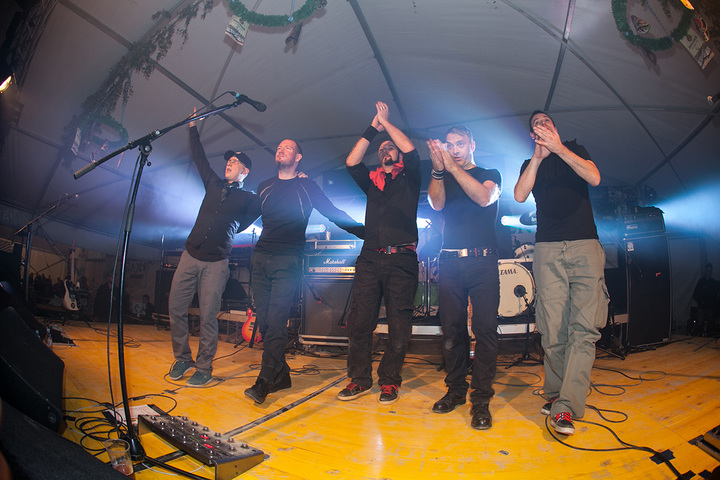 2013-09-24 | 64 pictures
Another day, another gig. This time we headed East, towards Koroška. During the drive there we entertained ourselves with yet another cinematographic masterpiece and as it turned out our driver, Lovro, didn't drive any slower than the drivers who were too fast and too furious. Somewhat cloudy weather threatened to turn to rain which soaked us on both concerts in the recent past, but as it turned out it took nothing more but a sound check to clear those clouds off the sky. We headed to our host, Nikolas, and his restaurant Saloon where they just don't cease to amaze with their abnormal, almost murderous (but very tasty) portions of food. The only one who managed a pancake (1) at the end was Kraški, but as it turns out he would eat an elephant we he was given the chance, so … Well stuffed with various assortments of Mexican cuisine we rolled (rather than walked) back to the bus and headed back to the venue. First tones of our intro and the venue began filling up. The part exploded with full throttle and the stage soon became flaming hot. We premiered (un)acoustic version of Novi Svet (Keaziree) and received and amazing feedback. When we finished we left the stage to Vlado Kreslin and headed to the bus to refresh ourselves with a few beers. On the way back to Ljubljana we were accompanied by "The Dude" Lebowski even though most of us (still culinarily weighed down) sunk into a light sleep.
Slovenj Gradec – you are always a pleasure! See you soon!