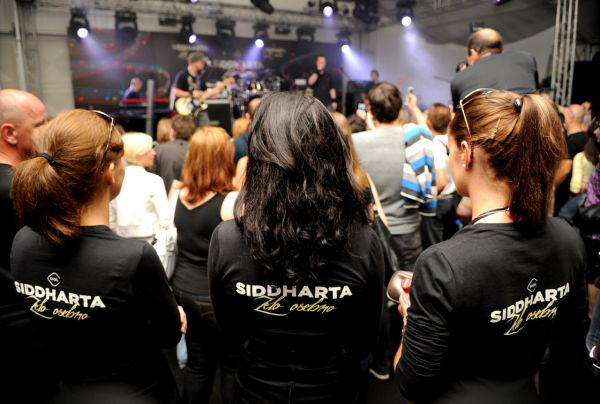 Concert at the Repanšek Gallery

Tonight is a special concert for us, quite special indeed. In cooperation with our sponsor Telekom Slovenije we came up with a unique trick. Here is the story.

We announce that at some point in the near future Siddharta is to play in an unknown venue. We organize a prize draw for 150 lucky winners and bus them to a location they have no clue about. Indeed, it works and our winners receive their invitations.

For the venue of this show we choose the Repanšek Gallery in close vicinity of Arboretum in Volčji Potok.

It is around 8 PM when the first bus brings in the winners of our trip into the unknown. These and all to follow are offered a welcome drink and greeted in the sensuously decorated tent. The tent in the gallery's courtyard fills up quickly and within an hour all 150 guests have arrived.

The concert starts, the atmosphere is seriously unique, somewhat magical, intimate and packed with pure positive energy. With the help of our fans we rock the place in our own best manner for about an hour and a half, and afterwards we spend the rest of the evening talking with our fans - till about 2 AM.