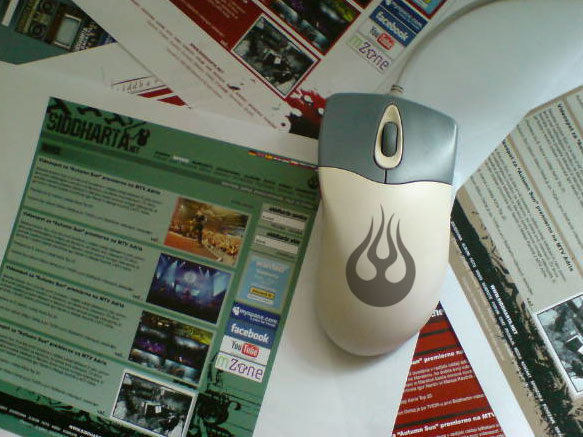 We just had to do it!

And you'll get used to it in no time so no worries.

It's been quite some time since the last "upgrade" and/or major change of our web site. And now we proudly present you with: SOWS* 3.0 - Upgrade pack 2.01.

Not only have we redesigned the damned thing, we've also restructured, optimised and rearranged some parts. It's a bitch, we know, but just read the second line of this news item again and everything will be "just dandy" in a heart beat.

One major change is that we have reduced the lingual options to Slovene, English, German and Croatian. Another major thing was the reduction from "Home-News-Concerts-History-Albums-Photos-Videos-Goodies-Forum-Chat-Store-Press-Contacts-Links-Search" (a total of 15 links) to "News-Concerts-Band-Media-FanArea-Goodies-Store-Partners-Contacts" (a total of 9 links). We have given more room to things such as text and photos and we've also added an actual biography of the band (in addition to the History). There is some other stuff we've changed but you'll see for yourself as you come across it.

It's been a long and tedious process, but we managed to pull it off. And this is where we would like to thank all those who "made it happen": Vasja, Nika, Steffi & Lea - thank you!

* Siddharta Official Web Site
(nothing to do with: sow 2 |sou| |saʊ| |saʊ|, noun, 1 an adult female pig, esp. one that has farrowed. • the female of certain other mammals, e.g., the guinea pig.)