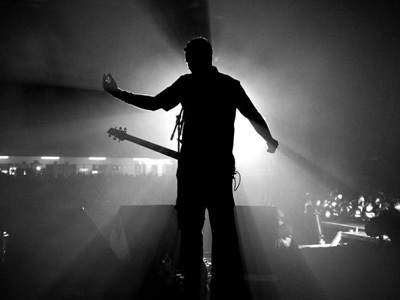 Our day began at around 8 AM when each of us took all the necessary things for the evening show, clothes, towels and such. At 9 AM we gathered at our rehearsal place where our crew had been loading all our gear into vans. Arriving at Tivoli, it took another hour to set everything up for soundcheck so the first checking started no earlier than around 1 PM. Other guests began to arrive and they too checked their own settings so that it would all run smoothly in the evening. The soundcheck again took longer than expected and we barely managed to get it over with by 6 PM when the doors opened for the first visitors. In the hour and half that we had left before stage time we had a little something to eat (you cannot play with food lying heavy on your stomach, can you?) and then at a quarter to 8 we took the stage. It began! The room was overcrowded and when we came on it felt like a dream come true. Of course we could not do without a few troubles here and there so during the short planned breaks we had to deal with a few cramps, results of month-long preparations and playing all day round. But positive energy and goodwill will heal anything and even the Marathon went on without any visible incidents. The further along we were, the better we were doing  and judging from the response we got from the audience, they too found that extra energy to go wild along with us right to the end. As a matter of fact the sight before the stage was indeed awesome. It felt like each and every one of them held out till the end. It was as if we had the room full of our true fans only. Our guests gave the whole event a special charm and they deserve a huge and special thank-you. When at 0:59 we stepped off stage, the on-stage stop-watch was stopped at 5 hours and 15 minutes. But after a show like that it was no time yet to go home. It was an event calling for a toast and celebration.