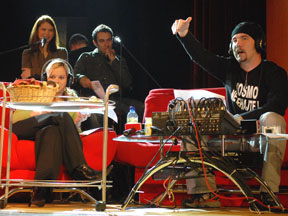 On Friday 19th of January, radio Hit was broadcasting live and also presenting in front of actual live audience with their musical-informational program. What made it interesting is the fact that it all started already at 5:30 in the morning and lasted all until 10:00. The show was aired live from the stage in the sold out theatre, where many Slovene musicians also performed as well. We figured it would be appropriate to show our good will with our performance too, but in order to do that we had to wake up at 7 in the morning already, which is quite unusual for musicians. :) When we arrived to the theatre we had breakfast waiting for us, milk and coffee drinks of course, so we could get started. We prepared Male Roke song for our performance which we did in acoustic version. Audience and Radio Hit of course, received us nicely and thanked us with applause and with that we concluded morning jollification. Since we have never done anything like this, we thought it was interesting, worth the experience and most of all meeting with the rest of the musicians, which was quite usual concerning the early morning hours, having coffee and chatting like "where were you playing last night" and "are you performing anywhere tonight as well"…Greetings to everyone until March, when we start with our spring tour.